Records for freezing cold temperatures have been broken all over the country this past week.  Here in the hills of Northwest Connecticut, below zero temperatures greeted us every morning.  Donning silk longjohns under my jeans, two undershirts beneath my wooly reindeer sweater, and cotton socks beneath my grey alpaca socks,  I was warm as I left for the farm at 6:45 in the morning.  I wear a hat (not usually in public) that is red plaid, has long earmuffs and a cozy sherpa lining. My old coat is long and hooded, my boots sturdy…and I keep blankets in the car thrown over the kids’ car seats “just in case”.

It was on such a “chilly” morning, after a dusting of snow blanketed the  the icy roads , that I headed to the farm.  Anne’s school, where she teaches art, was not delayed in opening, but Elsa’s was, so I’d have both grandchildren, Elsa and May, to enjoy for a while before the school bus came.  At the farm, the sheep were “in” and the chickens were huddled contentedly beneath the heat lamps. Anne was in her usual rush, leaving without gloves or hat, and taking PJ’s car to work since it had four wheel drive. Not too long after, Elsa was about the begin her oatmeal breakfast when the phone rang. Anne’s car had broken down up on the Seville Dam above the reservoir.  Smoke had poured from under the hood, and she had pulled off the road.  Could we come and get her? 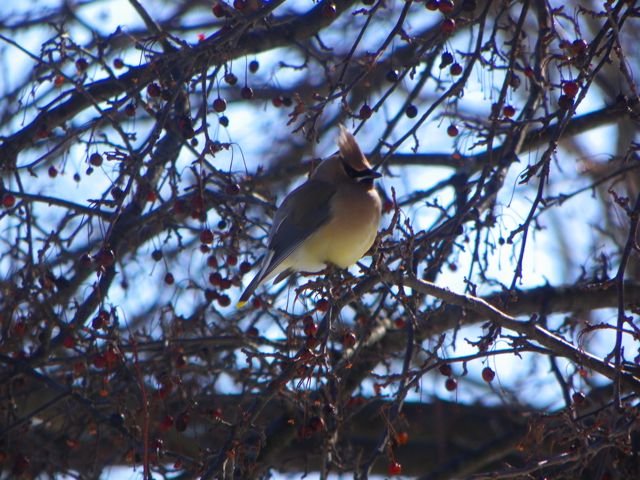 “Elsa, hurry up,” I said, “We’re on a rescue mission.  Mom’s car is stuck and we’re going to help her.”  While Elsa dressed, I got May bundled up.  I fixed a bottle, put the bowl of oatmeal in the car, and then tucked the kids into their car seats.

The lovely old river road was snow-covered, and at this early hour, the pale sun was glistening on the little ice flows that drifted along the still river.  We went slowly, passed near Elsa’s school where buses were beginning to arrive, and headed up the steep ascent toward the Dam.  Barkhamsted Hollow had existed as a nice little town years ago.  but when the State demanded a water supply for the cities, the little town had been “taken” and the residents re-located .  After the valley and Barkhamsted Hollow were flooded and dammed, very little remained to hint at its existence.  Walking on the beach once with an old friend, we saw the stones that would have led into the church, but now led to the water lapping the shoreline.

So now we were headed up to that Dam, sure to be a windy and freezing spot this morning.  We found Anne huddled in her car, but she greeted us with a big, relieved smile as she left a note for the trooper on the dashboard of the car.  She was sure glad we had been closeby to lend her a helping hand. Our rescue mission had been successful!

The adventure warranted a happy trip for donuts, bagels and hot cocoa.  Elsa proudly helped me carry her box of mini donuts out to the car…and seconds later May had a donut clutched in each little hand (She’s not one for keeping on her mittens!)  and we were gladly sipping the hot cocoas.  After dropping off Anne and May at the farm, Elsa and I headed off to her school.  The doors were already locked, so we had to brave the wind and wind chill to walk around the school to the main entrance where we would be buzzed in.  A good opportunity for a little lesson on frostbite and the need for keep her gloves and  hood on tightly.  I walked Elsa to her kindergarten classroom, and the sound of her boots on the corridor floor brought back a memory of her own mom’s boots clumping on a corridor floor many years ago.  A smiling classroom aide came out into the hall to greet us.  We approached the door of the silent classroom,  story reading going on, children gathered on the floor attentively. All eyes turned to the door as we approached.

With a big smile, and bubbling over with the excitement of the morning, Elsa broke the silence, proudly announcing, “WE had to rescue someone!”

This site uses Akismet to reduce spam. Learn how your comment data is processed.